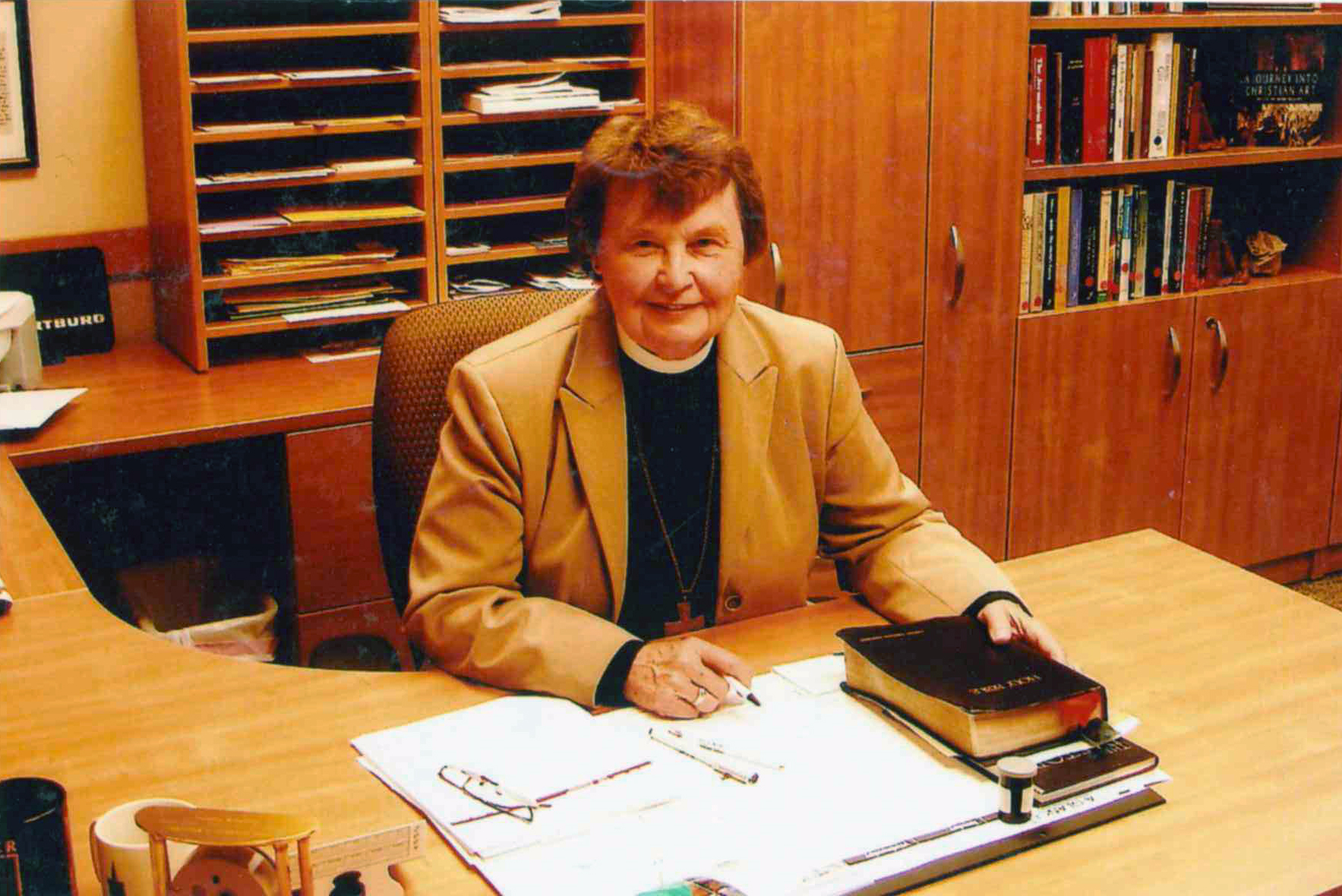 After her mother, Hazel J Knutson, died in 2009, Rev Barbara Knutson endowed a scholarship for students at Wartburg Theological Seminary (WTS) to honor both of her parents in, what Knutson calls, a “living way.” Knutson’s generous gift is bourne out of her gratitude for the ways her parents grounded her in the faith since she was a little child.

When Knutson was two-and-a-half years old she prayed the Norwegian Table Prayer by heart. Worship did not just take place at church, but faith conversations were a part of her daily life at home.

Knutson’s sense of call to ministry grew with time. She recalls, “My mother told me that in early elementary school I was writing little sermonettes and hiding them in my chest drawer.” When she was a sophomore in high school, she felt a strong call to become a pastor. However, at the time, women could not be ordained.

Still, she went onto study at St. Olaf College in Northfield, MN where she took nearly every course in the religion department, including religious education. “I did what I could do at the time,” says Knutson. Upon graduation, she became a Director of Parish Education in large churches in Havre, MT, Middleton, WI, and Fargo, ND.

During the Vietnam War, she says, “That’s when we had to be theologians.” During that time, she helped establish a youth program, “University of Faith and Life,” which focused on how to respond as people of faith with action in the world. In 1975, she was called as Director for Parish Support for the Division for Life and Mission in the Congregation of the American Lutheran Church (ALC). Knutson travelled across five districts from Northern Minnesota to the West Coast. She explains, “I would fly out to these places two times a week. My job was to know all of the congregational life resources, listen, and be a part of leadership. It was a wonderful way to learn the diverse contexts of our church and appreciate them.”

Knutson was later called to use her gifts in theological thinking and teaching to serve alongside Bishop Darold Beekmann (WTS alum) as Southwestern District Minister in the ALC as well as the ELCA for a total of 14 years. In this capacity, she would do a “3-day live-in” at a congregation in the synod. Knutson says, “It was a way of being with congregations, listening to them, and helping them to discern faithfulness to the Gospel in their context.” After 3 days, she would present a snapshot of what they saw and ask, “Is this anything like the full movie?” When there was a crisis in the community, she would return and encourage the congregation, saying, “We know this is not your whole story.” Knutson says, “I was teaching all the time. That is how we built relationships.”

After 31 years in ministry, the call to become a pastor that began as a child confronted Knutson again. As she was planning to host a 50th wedding anniversary for her parents, she reached out to their new pastor, Rev. Harriet Danielson, who had recently graduated from WTS. Knutson says, “She welcomed me. We began to be friends. We would go for walks on County Road C. She asked, ‘Isn’t it time you go to seminary?’ I responded, ‘No. My baptism is my ordination into ministry.’”

But after 5 weeks, Danielson’s question would not go away. Knutson called the Admissions Office at Wartburg Theological Seminary to set up a visit and didn’t tell anyone from her synod staff. She thought, “If I could only go to a preaching class, then I will get it out of my system.” Knutson’s campus visit included a conversation with President Roger Fjeld, whom she had known in during ALC staff years. She told him, “’If I had a headache in the morning, afternoon, and evening for 5 weeks, I would go to the doctor. But I haven’t had a headache…Several times a day it hits me again: Is this the time to go to seminary? I don’t want you to talk me into it. I am not looking for another job. I love what I am doing.” It was time for chapel and she gathered for worship with the community. In the afternoon, she ran into Professor Norma Cook Everist in the hallway, who happened to be on campus getting a book, even though she was on sabbatical. Knutson says, “I had known Norma. She took me into her office and said, ‘Barbara, what are you doing here?’ I said, ‘I have my life on my mind.’
Norma responded, ‘What do you really want to be doing at 2 o’clock in the afternoon on Tuesday 10 years from now?’”
Knutson never made it to preaching class that day. She drove back home with the words of President Fjeld ringing in her ears: “If you believe you are being called to escort the Word of God in a community week-in and week-out, [WTS] is a wonderful place to come to.”

The word, “escort,” as both a noun and a verb, has not left Knutson’s imagination since. She explains that to be an escort is “to bring the important one into view and get out of the way.” This has been seminal in all of her ministry—to be an escort for the Word of God. “God is already here,” she says. “Someone needs to say, ‘Behold, the Word of God. See.’”

When Knutson went to the post office to drop off her application, the table looked like an altar. She prayed, “God, I am putting this on your altar and you can do what you want. I can’t figure this out.”

Knutson graduated from Wartburg Theological Seminary in December 1995 and was ordained as an ELCA pastor the following year. She explains, “I had served 31 years. I could have retired. I ended up doing another 13 years in pastoral ministry. I retired after 44 years, but I flunked retirement.”

Knutson has since served three congregations part-time, equaling a total of 51 years of ministry. She has recently begun her 5th year at Evangelical Lutheran Church in Black River Falls, WI, where she does pastoral care twice a week with people who are octogenarians or older. She preaches and/or presides twice a month. She still is teaching. But she has officially retired from meetings.

Many people walked alongside Knutson throughout her ministry as a baptized Christian, even from an early age. She recalls that when she was four-years-old her church had a family night where she got to read her ABC Bible Storybook in front of the whole congregation. “But I couldn’t read,” she says. “I was reciting it all by heart. The pastor who baptized me jumped up, turned to the people, and said, ‘What a voice! What a memory! Isn’t it too bad she isn’t a boy so she could be a pastor someday?’”

At the 150th anniversary of her childhood congregation, she expressed gratitude to her late pastor by looking upward and saying, “Pastor Sweger, thank you for saying what you did out loud even though it has taken the church a quarter of a century to hear you.”

Now, Knutson is passionate about encouraging the next generation of pastors. Not only does she support seminarians through her endowed scholarship, but she also she uses her gifts as a teacher to encourage and name the gifts of the youngest future pastors among her.

At her retirement party, she gathered the children around her and said, “I am a retiring because I am getting older but we need others to replace us. There is only one place pastors come from—congregations—like this one. It could be you.”

Knutson also has ongoing conversations with one of her 7th grade parishioners who has ministry on her mind. “We talk about how God’s Spirit works in her life and how to be faithful in the meantime,” says Knutson. When Knutson was invited to a high school graduation party for a student who had talked to her about ministry in 1st grade, she gave him a WTS keychain and told him, “You just never know when it might be the key to what you are called to do.”

Knutson’s lifelong commitment to God’s church motivated her to establish the Selmer M. & Hazel J. Knutson and Barbara J. Knutson Endowed Scholarship. Her generosity pours from a place of gratitude—not only for her time as a student of Wartburg Theological Seminary—but also with gratitude for the long-standing Loehe tradition that continues to shape Wartburg to this day.

“When I came to Wartburg, we got a folder the first day. The cover said Gospel, Church, Mission– in that order. I knew I was in the right place. The Gospel forms the church, and the church is not the church unless it participates in God’s mission.” She continues, “The church needs resident theologians in the congregation more than anything else to help people think theologically about what they do. Otherwise, the church will be another organization of its human make-up and human demise rather than being the organism of the living body of Christ.”

One of the things Knutson most appreciates about Wartburg is their long tradition for asking open questions. This is why one can apply Gospel, church, and mission to new contexts. Knutson believes, “The Gospel will travel in the midst of those questions.”

Knutson has stewarded the holy mysteries of God (1 Cor. 4:1) as a teaching theologian her entire life. In 1986, she was surprised with the honor of receiving a Distinguished Alumni Award from St. Olaf College for being a lay theologian in the church. In 2011, Wartburg Theological Seminary gave her the Living Loehe Award in recognition for her “dedication, quest for excellence, evangelical warmth, and servant devotion.”
Knutson explains, “The wondrous holy mystery is how God calls, works with us, graces us, changes, picks us up, steers and guides us when we don’t know where we are going.”

Lately, Knutson spends a lot of time talking about end of life issues with older people. “It’s the harvest season,” she says. Knutson’s late father, Selmer, was a farmer. “Any good farmer has one thing in mind the day one plants—harvest,” says Knutson. She continues, “Our culture talks about how elders are drain on society. I remind them, ‘No, that isn’t how God thinks. God thinks harvest.’”

This, Knutson believes, is how we offer our lives back to God in the harvest— gratitude.