Belief and Unbelief: God on Your Brain 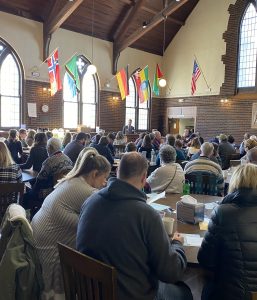 Who are we? What is our place in the cosmos? What is the meaning of life? These are just some of the questions Dr. Jake Kurczek, Loras College Assistant Professor Neuroscience and Psychology, led with during 2020’s first convocation (regular and intentional community dialogues) at Wartburg Seminary. Dr. Kurczek serves as an adviser on the grant WTS was recently awarded by the American Association for the Advancement of Science (AAAS) to participate in the Science for Seminaries Dialogue on Science, Ethics and Religion (DoSER) Science for Seminaries project. The project supports efforts to incorporate science into core curricula and to prepare future clergy to address questions of science, ethics, and religion with their congregants.

Even as many view science and religion as topics that are at odds, Dr. Kurczek’s presentation highlighted that awe and wonder about science and the cosmos actually increase our capacity to believe in an expansive and wonder-full God. In his presentation titled, “Belief and Unbelief: God on Your Brain,” Dr. Kurczek shared: “Our goal is to examine the role of the sciences in the life of the church and how they can shape the religious meaning of what it means to be a human in light of these sciences and technologies, in relation to efforts of neuroscientists to understand the contribution of the brain to belief.” Dr. Kurczek’s research has investigated the relationship between memory, language and decision-making amongst other cognitive functions in order to develop aids and strategies to improve thought and cognition.

But what does belief have to do with the brain? While religious belief may seem to be a unique psychological experience, a growing body of research shows that thinking about religion is no different from thinking about secular things—at least from the standpoint of the brain. A functional neuroimaging study compared religious and nonreligious thoughts, evaluating the truth of either type of statement was found to involve the same regions of the brain.

Researchers at UCLA used functional MRI to evaluate brain activity in 15 devout Christians and 15 nonbelievers as the volunteers assessed the truth or falsity of a series of statements, some of which were religious (“angels exist”) and others nonreligious (“Alexander the Great was a very famous military ruler”). They found that when a subject believed a statement—whether it was religious or not—activity appeared in an area called the ventromedial prefrontal cortex, which is an area associated with emotions, rewards and self-representation.

And although the nonbelievers rejected about half of the statements the believers accepted, the brain scans of both groups were indistinguishable, providing further proof that evaluating truth or falsity is independent of the content of the statement in question. The finding adds to the mounting evidence against the notion, popular in the scientific community as well as among the general public, that religious faith is somehow different from other types of belief. So now that we see that all beliefs are processed by the brain in a similar way, how might engagement with science affect belief in religious concepts?

Research published last year from Arizona State found that scientific information can create a feeling of awe, which leads to belief in more abstract views of God. Though science is often thought of in terms of data and experiments, science might be more to some people. To test how people connect with science and the impact it had on their beliefs about God, the researchers looked at two types of scientific engagement: logical thinking and experiencing the feeling of awe. Researchers surveyed participants about 1) how interested they were in science, 2) how committed they were to logical thinking and 3) how often they felt awe. Reporting a commitment to logic was associated with unbelief. The participants who reported both a strong commitment to logic and having experienced awe, or a feeling of overwhelming wonder that often leads to open-mindedness, were more likely to report believing in God. The most common description of God given by those participants was not what is commonly found in houses of worship: They reported believing in an abstract God described as mystical or limitless. “When people are awed by the complexity of life or the vastness of the universe, they were more inclined to think in more spiritual ways, the feeling of awe might make people more open to other ways of conceptualizing God.”

In a second experiment, the research team had the participants engage with science by watching videos. While a lecture about quantum physics led to unbelief or agnosticism, watching a music video about how atoms are both particles and waves led people to report feeling awe. Those who felt awe also were more likely to believe in an abstract God. These findings suggest that scientific engagement does not always erode belief in God, instead, science-inspired awe can increase representations of God as a mystical cosmic force or as being beyond imagination.

Dr. Kurczek’s presentation was part of a longstanding and unique tradition at Wartburg Seminary: regular convocations. Professor Rev. Dr. Troy Troftgruben described this practice: “Overseen by the Community Life committee, convocations serve an important role in fostering open conversation on challenging issues in our shared life together. After a shortened chapel service, we gather at the tables in the refectory and by Zoom online face-to-face conversation.” Typically three times a semester, each convocation centers on a different topic, is led by faculty & students & staff, and engages topics worth ongoing dialogue.” Convocations play an important part of the rhythm of the shared life together among our students, faculty, and staff as they create space for conversation about topics that matter and deserve ongoing discussion.

“These findings suggest that scientific engagement does not always erode belief in God, instead, science-inspired awe can increase representations of God as a mystical cosmic force or as being beyond imagination.” – Dr. Jake Kurczek

For this convocation, students, faculty, and staff engaged in the following questions around tables in the Refectory, even spilling over into Weiblen.

The presentation and discussion that followed were both rich and incredibly valued by the whole community, leading Dean Craig Nessan to proclaim, “Well, that was awesome!” at the end of Dr. Kurczek’s presentation.

The integration of science into the WTS curriculum is a result of Wartburg’s grant award from the American Association for the Advancement of Science (AAAS) to participate in the Science for Seminaries project of the AAAS Dialogue on Science, Ethics and Religion (DoSER) Program. For an opportunity to join with us in more discussions that integrate topics like these, join us for the Creation in Crisis Conference, April 15-16, held at Wartburg Seminary in Dubuque, IA or via livestream. For more information, visit the event page.

More about the Presenter:
Dr. Jake Kurczek is assistant professor of neuroscience and psychology at Loras College in Dubuque, IA. He obtained his doctorate degree in neuroscience from the University of Iowa in Iowa City, IA in 2014. After graduating from the University of Iowa, Dr. Kurczek completed a one-year post-doctoral fellowship at York University in Toronto, ON, Canada and then worked as a visiting assistant professor at Haverford College in Haverford, PA for one year. Since joining Loras College in 2016, he has worked at the ground level to build the systematic integration of civic-engagement into every fabric of the Loras College experience.