New Estate Gift To Provide Over $20,000 in Annual Student Support 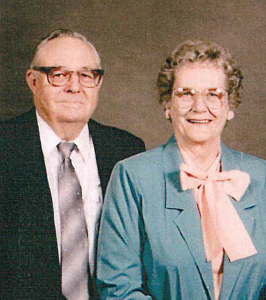 Wartburg Seminary is humbled and excited to announce the formation of the Didrik & Dorothy Bohm Scholarship, which will provide over $20,000 annually in direct support to seminary students. This fund is made possible by the Bohm estate, which is providing a gift of over $400,000 to Wartburg Seminary as well as long-term financial stability to their home congregation, Zion Lutheran, Mohall, ND. The Bohm endowed fund becomes part of Wartburg’s $30 million endowment, which now generates over $1 million in financial support to the seminary and students every year.

After serving in World War II, Didrik’s dream was to attend Wartburg Seminary to become a pastor; but he fell in love with Dorothy. Since married seminary students were strongly discouraged at the time, he became a farmer instead. Didrik passed away in 1999 and Dorothy died in 2020. Throughout their 50 years of marriage, Dorothy and Didrik were both very active in church leadership. Didrik frequently talked about the importance of helping the church form and call more pastors.

Rev. Todd Olson, WTS ’05, served as their pastor at Zion in Mohall.  He explained the Bohms’ had huge respect for WTS came from their experience of being served by many good WTS pastors over the years: “Dorothy frequently talked about the importance of seminaries to the mission of the church; it was clear this was one of her and Didrik’s priorities.” He added: “They were always future-minded, wanting to invest in the future.” Shirley Olmsted, their niece who is facilitating the details of the Bohm estate, is also served by a Wartburg pastor—Rev. Phil Lerr WTS ’96 of First Lutheran, Mandan, North Dakota.  Shirley was happy to help bring this gift to reality because, for many years, “Dorothy was clear about their desire to support Wartburg Seminary.”

Born in 1925 in Sioux Falls, South Dakota, Didrik was inducted into the Army Infantry in October 1945 during World War II. He later transferred to the 747th Army Air Force. He was stationed in Naples, Italy, where he supervised the Italian Civilian Teletype Mechanics. He was discharged in January 1947 and then attended the North Dakota State School of Science in Wahpeton for a time.

Dorothy, born in 1925 in Sherwood, North Dakota, worked at Trutna’s Department Store upon graduating high school and she and Didrik married in 1949. They lived and farmed in Mohall, North Dakota, but moved to the Seattle area, where Didrik was employed by the Boeing Company for 10 years before returning to Mohall to continue farming until their retirement. They also enjoyed traveling, fishing, camping, making new friends, and lots of pinochle games.

Thanks be to God for Didrik and Dorothy.  Their generosity provides a lasting impact on future generations of leaders to be formed and sent from Wartburg Seminary!