Emerging Out of Darkness 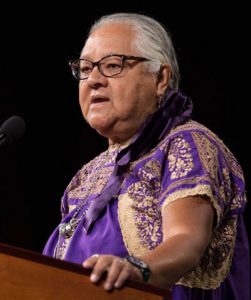 Enedina Casarez Vasquez has known she was called to ministry since she was nine years old. She faithfully attended her Catholic church every Sunday with her friend, Tony. One day she noticed that Tony wasn’t sitting with her but was instead processing with the priest and carrying the cross. Tony was filled with joy, smiling for all to see as he rang the bells and prepared the altar for worship. Vasquez was eager to serve as Tony was serving but was told she could not serve since she was a girl. Vasquez says of that moment (and long after), “I felt less of a human being, and less of a child of God.” Not feeling worthy to serve God’s church, this deeply impactful interaction guided Vasquez’s life.

Even though Vasquez eventually left the Catholic church, faith remained central in her life. She and her husband were very successful religious iconographers explaining the intersection of race, culture and religion until his death in 2004. Vasquez continued to use art as a tool to teach faith, and eventually came upon an Episcopal church. It was in that space that she saw a woman serving as a pastor for the first time. She immediately joined that church and enrolled at the Episcopal Seminary of the Southwest to take courses. She received a certificate in Spiritual Direction with the hopes of one day becoming a pastor too.

Upon her completion of her time at the Episcopal Seminary, Vasquez got a call from her lifelong friend, Sister Norma, with an idea. They met up to discuss the idea and the “Platicas” ministry was born. Vasquez explains about naming this ministry: “in Spanish a ‘platica’ is more of a passionate gut-wrenching talk between people. It is a talk with someone where you share your story, hear theirs, and thus reach common ground. It is like when quilters get together and create, talk, laugh, cry, and find self among others.” Platicas invited women to meet and hear the word, pray, and learn to be comfortable again as a follower of Christ. This goal to bring comfort and peace back into the faith lives of women in the Platicas ministry was so important for Vasquez, since they were like her: women who had been either rejected or perceived rejection from the church.

Platicas was a group of all kinds of women—some who went to church, some who did not, and some who had left. The women who came to Platicas were feisty, hard-working, and educated. The women came in all sizes, shapes, education, and professional levels, but all wanted something that they were not getting in church. They gather, break bread, worship, and create art. While creating the art related to the worship theme or scripture, they talk, share stories, and take the art home where it is often a conversation starter about faith.

Sister Norma died six months after she and Vasquez began Platicas, but the legacy of her idea lived on in the ministry and through Vasquez. At one point, Platicas faced an ending because of a lack of funding and support. Vasquez was determined to keep the ministry going when Vasquez met Rev. Dr. Judith Spindt, then Director of Mission Development in the Southwest Texas Synod of the Evangelical Church in America (ELCA). They were in Denver as part of a group of Episcopal Latinos meeting with a group of Latino Lutherans. Vasquez says, “I spoke to those present at one of the gatherings and I told them about my frustration that my Platicas Ministry was dying due to lack of funds and the ability to get support. I was at my last-ditch effort to get help. Dr. Spindt raised her and said to me, ‘I will help you.’ That day, right then and there she sat with me and asked me about the makeup of my ministry and helped me to form some sort of thoughts on petitioning the ELCA to help me. That was the day that changed my life forever.” Dr. Spindt had heard of Platicas and was eager to meet Vasquez in Denver. When Vasquez made the plea for support, Dr. Spindt jumped at the opportunity to find a way for the ELCA to support her and her ministry.

Vasquez returned from that trip and continued working with the Dr. Spindt, who also worked diligently with the Episcopal church to keep Platicas alive. Eventually, the Lutheran church became the primary partner, and Platicas was moved to the Lutheran Church of the Good Shepherd in San Antonio. Since then, Platicas has grown to three different sites meeting regularly in Lutheran churches and meeting the needs of unchurched women and families. Dr. Spindt raised her hand and told Vasquez she would help, and she has been a constant in Vasquez’s development ever since. She assisted by identifying people to support her outreach to women, she helped with finding funding, and also got the word out about Platicas in the synod.

Vasquez was encouraged to pursue ordained ministry in the Lutheran church: “I have been ready all my life to do this.” She continues, “All I needed was support and for someone to know that Platicas is a way to get unchurched people to come back to a new church that is not judgmental and demanding. I have always been ready, I just needed help and it has taken me a life time to find it. God has worked a miracle in my life.”

In conversation with her synod, the TEEM program arose as the best way forward for Vasquez. Of the program at Wartburg Seminary, she says, “I chose this program because it was the best for me. This program is so helpful in getting qualified Latino Lutherans into the church and in getting them ready to become church leaders. In the TEEM Program I have met others who have gone through the system and they are already part of the church in all its capacities. I can see the future here, a place that is open to me to serve God to all my capability.”

Vasquez serves the Lutheran Church of the Good Shepherd in San Antonio, Texas, the congregation that hosts Platicas. Vasquez is hopeful about the future of the church because she knows so many people are hungry for a church that welcomes them as beloved and accepted by God, and the ELCA makes that possible. When asked about the ELCA, Vasquez shared: “My favorite part of being Lutheran is that I think I have been Lutheran all of my life and it has taken me this long a time to know it. The Lutheran Church is where I am because I know that God loves me for who I am and for all that I have struggled. The more I learn, the more I am convinced that this Lutheran home is the place for all of the women (and) who have been ostracized because of their race, gender, or orientation. Lutherans live the gospel and I am embraced totally by my Lutheran Church.”

When Vasquez completes her TEEM certificate program, she will be ordained as the pastor to Good Shepherd Lutheran where she serves today. Vasquez is excited to bring to fruition the call to ministry she has felt since she was a young girl. She considers other young women and the potential roadblocks they face on a journey to ministry: “I often find myself wishing I could speak to all young women today. I want to say to them that if they love God and want to be of service in their church, any church, they should do it. Go to seminary, learn theology and church history, and keep working to change the paradigms that persist against women clergy. It is up to the women to say: we know better and we can do better. Women have emerged out of the darkness. We are the future of the church. We will nurture new generations of worshipers, believers, and doers. The image of God enfolds us and sets us free. All of us.” Amen!