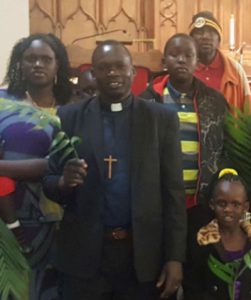 Philip Deng comes from extraordinary circumstances. Despite the volatile surroundings he grew up in South Sudan, Deng has become a steadfast and dedicated presence to his community in service as the pastor to the South Sudanese Congregation at First Lutheran Church in Saint Joseph, Missouri.

Philip has felt called to serve God’s people since a young age with the help of so many advocates along the way. The first person to encourage Deng in his call was his brother Mabil Deng, followed by a series of pastors and his wife. Upon coming the United States as a refugee, Deng wanted to continue to serve God’s people by getting involved in a local congregation.

Deng came to First Lutheran Church in 2006 and began a service in Dinka and Arabic for the South Sudanese community in 2007. The pastor at First Lutheran, Rev. Roger Lenander, shares of Deng’s ministry: “Philip’s personal journey of faith is grounded in the steadfast love of God in Jesus Christ for all people. The civil strife he experienced as a child cost him a safe and secure childhood and resulted in his starting over in a new country as a teenager. He never tires of bringing good news to strengthen, encourage, and guide others who have similar experiences and continues to bring this trust and hope in Jesus Christ to the next generation.”

Deng says looking out at the South Sudanese worshiping community reminds him of being home in Africa when he first felt called to ministry in Sunday School. He loves looking out and seeing the children and “the happiness of people being together to share love and good news.” Pastor Roger Lenander and Bishop Roger Gustafson encouraged Deng in his ministry and the gifts he brings to the Central States Synod of the Evangelical Lutheran Church in America (ELCA). It was then they started thinking about the Theological Education for Emerging Ministries (TEEM) program as an option for Deng to pursue ordained ministry.

Deng shared that Bishop Gustafson identified Wartburg Seminary as the best choice, and Deng came to agree with that. Of his education in the TEEM program, Deng shares, “I will say, there is nothing bad about Wartburg. I have heard that Wartburg pastors are some of the best in the nation. I am proud to be one of them.” The TEEM program has had a huge impact on Deng’s ministry. He describes the experience as lifechanging and as an integral part of his call to serve God’s people.

Deng’s story and presence as a TEEM student at Wartburg Seminary has made an impact on staff and faculty, too. Rev. Louise Johnson, President of the seminary, shares of her interactions with Deng, “My conversations with Philip helped to deepen my understanding of the challenges particular to our students coming from immigrant and refugee communities. It isn’t that the challenges they face are so daunting, it is that the systems we have designed preference a particular community, set of values and way of being in the world. God is at work calling leaders from a wide range of communities. We are committed to responding with excellence.”

The response of excellence that President Johnson named grows out of our deeply relational faculty members, who care for, challenge, and nurture TEEM students in the same way they do for all of their students. Rev. Dr. Winston Persaud describes his knowledge of Deng, “Philip comes to his seminary studies with a strong desire to grow in his theological and pastoral formation, so that he might faithfully witness to the Lord Jesus Christ, particularly to immigrants from South Sudan. In conversations with him, it is obvious that he is pondering deeply how he might make connections between his primary cultural background and mainstream culture in the U.S.A. He sees making these connections as crucial to faithful witness to Jesus Christ in the ‘worlds’ in which he lives on a daily basis.”

Deng brings his full self to ministry, sharing that a calling to ministry is not a simple job. Although he may try to be the perfect pastor with the ability to give himself away to his congregation members, he is human too. He is sustained by his deep abiding faith and compassion for those in his community and views emerging ministry as “the mission to serve individuals and families to provide and strengthen their faith, and also provide more global faith resources and experience, and to advocate for global responsibility.”

Deng’s love for ministry and the community he serves is undeniable. The support he has received through the TEEM program, from his pastor, Bishop, and WTS have allowed for our church to gain a new leader, for the leadership of the WTS TEEM program to be strengthened, and for the leader himself to grow significantly in his ministry. Thanks be to God.