Reflections on a Life of Advocacy for Namibian Independence

FIRST PUBLISHED IN A 2016 ISSUE OF THE LIFETOGETHER MAGAZINE.

“It was part of daily life. We always joked that someday she’d be arrested for political activism. [Her] belief in reaching out to the world and to other people was just part of our lives from the time when I was small.” -Faith Trapp, daughter of William Weiblen (former WTS President) and Ilah Weiblen 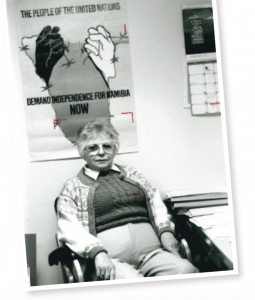 Faith Trapp, daughter of the late former president, William Weiblen and Ilah Weiblen, recalls the passion and persistent advocacy of her mother Ilah regarding Namibian independence. How could a “little old lady from Dubuque” have such strong connections with a seemingly far-away place? This is a story about transformative relationships leading to actions for justice and peace.

“I’d like to tell you a little story about my mom that taught me about using our individual talents, even those that often lie hidden,” shares Trapp. “We only need to give God a chance to work in us.”

Trapp’s mother Ilah was a homemaker, described as a wonderful cook, seamstress, needleworker, decorator, wife and mom. “She taught Bible School, Sunday school, participated in the Women’s Circle—you name it, she was there. But, she was never a ‘leader’ and never really expressed a wish to be one until an issue that touched her soul called her,” recalls Trapp.

The issue that touched Ilah’s soul was Namibian independence. Trapp shares, “In the 1960s and 70s, most in the US were disconnected from the repression of South Africa’s apartheid. But apartheid came to be very real to my mom when Wartburg Seminary welcomed a number of students from Namibia, then ruled by South Africa. The first Namibian student arrived in 1971 with his wife: Abisai and Selma Shejavali.”

The Shejavalis and Weiblens struck up a close friendship: William and Ilah became godparents to Abisai and Selma’s second daughter. Along with their friendship came the sharing of stories, and once Ilah learned more the reality of life in Namibia in the 70s, she knew she had to take action and share the story. And for the next twenty years, she did. “She talked about it all the time,” Trapp recalls. “It was part of daily life. We always joked that someday she’d be arrested for political activism. [Her] belief in reaching out to the world and to other people was just part of our lives from the time when I was small.”

Ilah did her research, recalls Trapp. “My mom and a few other people from Wartburg Seminary took it upon themselves to find out about what the laws of apartheid meant in the daily lives of people in Namibia. They researched and they listened to the students and their families. They learned that, even though the country was 94% African, whites were given control of all economic interests. There were severe restrictions on where Africans could live, where they could work, how much they could make, and what education they were allowed to have. There was real struggle for economic and political independence from South Africa, as well as a basic struggle for personal freedom and social justice.”

Namibia was colonized by Finns and Germans in the 1800s, and had been under South African control since WWII. Though they were supposed to have independent elections in the late 1940s, the South African apartheid government refused because they were eager to take advantage of Namibia’s mineral wealth, as well as having access to an important harbor, Walvis Bay. Human rights abuses were commonplace and suffering was rampant. Though Iowa and Namibia are thousands of miles away, the pain of the Namibian people was not distant to Ilah or others who heard the Shejavalis speak.

“Mom and two other women of Wartburg [Solveig Kjeseth and Susan Burchfield] took it upon themselves to start educating people in the church and in the US about these struggles. They started a letter writing campaign to senators, representatives, the President, and various large corporations like IBM. They organized workshops, seminars and conferences around the country on Namibia. They gave presentations in churches. Now, I could not imagine my mom standing in front of a hundred or more people giving a talk on an issue like this, but she did,” says Trapp.

The women talked to every group that invited them. Ilah, Solveig, and Susan educated, networked, and advocated. Soon, churches and groups around the country supported Namibian independence, becoming involved with National Namibian Concerns, the grassroots movement based at Wartburg Seminary. National Namibian Concerns mobilized more than 10,000 Lutherans to support Namibian independence and sanctions against South Africa.

“They kept at this for more than twenty years,” Trapp says, proudly. “Finally, on a very joyous day, March 21, 1990, my mom and the others of the National Namibian Concerns organization… celebrated the independence of Namibia from South Africa and the start of a democracy ruled by the majority African population.” National Namibian Concerns, including Ilah, helped in drafting Namibia’s constitution.

“God certainly directed my mom to use her talents in ways I never dreamed were within her,” Trapp says. In 1991, Ilah and her family went to Namibia shortly after independence. They spent time with the Shejavalis, visiting schools, orphanages, and churches.

“Finally, on a very joyous day, March 21, 1990, my mom and the others of the National Namibian Concerns organization…celebrated the independence of Namibia from South Africa and the start of a democracy ruled by the majority African population.”

Ilah worked tirelessly on archiving “every single piece of information that they got their hands on about what was happening in Namibia.” The Namibia archives still reside at Wartburg, where there are artifacts and documents that aren’t found anywhere else in the world. Ilah’s passion for Namibian independence still lives on, and her family is still deeply connected to the Shejavalis.

“The year after [my mom] died we took some ashes to Namibia and had a memorial service at Paulinum Seminary for her,” Trapp says. The memorial service was done by none other than Abisai Shevajali, who remained active in Namibia’s struggle for liberation, was the president of the seminary, and also served as general secretary for the Council of Churches in Namibia.

Trapp learned a lot from her mom, and encourages, “As you consider how you can serve our community and in the world at large, remember that we all have unique talents that God will put to good use if we are only willing to look beyond ourselves.”

Relationships lead to transformational action. Wartburg continues to celebrate Namibian independence, as well as host Namibian students. Almost 90% of Namibia’s population is Christian, and at least half of all Christians in Namibia are Lutheran.