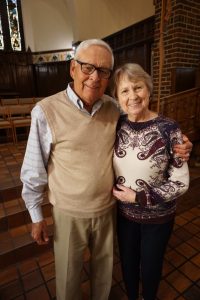 Ever since Rev. Glen Gronlund graduated from Wartburg Seminary in 1959, he and his wife Shirley Beito Grondlund have been driven to give back in support of the future of the church and the seminary. Throughout their lives of service, Glen served as a pastor, as a leader in national church offices, and as a consultant providing expert fundraising support to congregations and nonprofits. Over the years they have provided in excess of $300,000 in direct support for the mission of Wartburg Seminary and have created several special funds that have touched many lives.

In 1999, their generosity formed The Glen H. and Shirley Beito Gronlund Mediterranean/Ancient Near East Travel Fund to provide scholarships for all students and their spouses who participate in the January Term Cross-Cultural Immersion experience to the Middle East. Since its inception, over 100 WTS students and spouses have benefited from this fund. Shirley and Glen also honored Glen’s brother Robert, WTS class of 1953, through the creation of the Dr. Robert B. Gronlund Memorial Stewardship Lecture Series which has supported educational seminars focused on teaching good stewardship practices, including several of the WTS annual reunion events.

While praising the growth and stability of Wartburg Seminary, Shirley and Glen wanted to make a more profound statement of support directly to future church leaders.  Earlier this year, they formed The Rev. Glen H. Gronlund and Shirley Beito Gronlund Scholarship with an initial pledge of $100,000 to the seminary Endowment. With sincere thankfulness to God for the blessings they have received, this scholarship will be offered to any student at Wartburg Seminary.