Leadership in Women of the ELCA: Pathway to Seminary 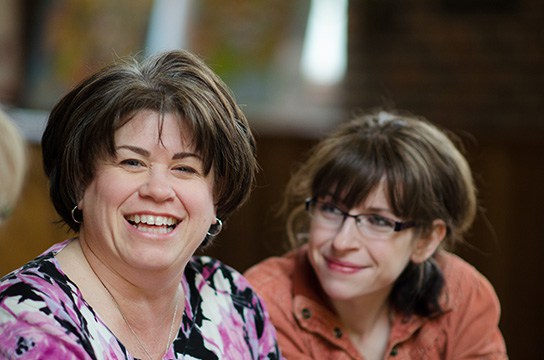 “An old saying goes that ‘you are just one YES away from your miracle’,” recalls Jennifer Michael, a first-year Master of Divinity student at Wartburg Theological Seminary. For Jennifer, that one “yes” came in 1995 when she agreed to participate in a Women of the ELCA circle group at her church. Jennifer recognizes now that that “yes” was the transformational moment that changed the trajectory of her life, putting her on a path that eventually led her to become the churchwide president for the Women of the ELCA (WELCA), a role she has held since 2011, and also to pursuing theological education at Wartburg Seminary.

Jennifer is a native of Pensacola, Florida who confesses that before moving to Wartburg Seminary she never spent more than a few weeks north of the Mason-Dixon Line. A second-career seminarian, Jennifer held a variety of professional jobs before coming to Wartburg, ranging from an ophthalmic nurse at a cataract and corneal surgical facility to being the executive assistant to a company president. Her career path led her to Tampa, FL; to Alabama; and even to Guantanamo Bay, Cuba where she worked for a government contractor office serving the U.S. military community there.

While Jennifer pursued her career, she simultaneously pursued increased involvement in the Women of the ELCA, only it happened somewhat by accident. In 1995, on the invitation of two women that Jennifer knew, she joined their circle group at church. Jennifer remembers, “These women reached out to me, asking me to attend just one meeting after church. My response was often that I was too busy or that I had too much on my plate right now. But undeterred, they kept inviting me… and one Sunday, I realized that I didn’t have a really good excuse not to go. And from that first meeting, I felt welcomed and valued as part of the community.”

Starting just two years later, Jennifer began serving as a congregational unit president, and then continued as conference secretary and president and as a synodical board member. In 2005, she was elected president for Florida-Bahamas Synodical Women’s Organization. But, her leadership roles within the Women of the ELCA continued, acting as a member of the churchwide executive board from 2008 to 2011. Since 2011, she has served as the churchwide president for WELCA.

From the very first meeting that Jennifer attended with the Women of the ELCA, she began to uncover a greater sense of faith with the support of the community of women. Throughout her time with the organization, she says, “I was encouraged to use my gifts with communications, teaching and leading to strengthen the organization as well as to participate in our mission and ministry. Within the various expressions of Women of the ELCA (congregational, synodical, and churchwide), I found the unpressured space that I needed to cultivate a more fully formed spiritual life as well as a sense of vocation within the life of the church. Through mentors, sisters and friends, I was nurtured and prepared.” “But even so,” adds Jennifer, “I had thought throughout this time that my vocation was solely for leadership within women’s ministry. However, I can see now that God had other plans!”

It was in 2009, while living in Guantanamo Bay, Cuba that Jennifer came to realize that she might be called to a different type of ministry in the church. While at Guantanamo Bay, Jennifer was part of a small Lutheran community there, about twenty members strong, which suddenly found itself without a chaplain. Jennifer shares, “The only option to continue our worship together was for one of us to serve as a lay minister of Word and Sacrament. Because of the relationships that I built while serving with Women of the ELCA, our group selected me and I received the special licensure from my bishop in the Florida-Bahamas Synod. And it was during that six months or so where I fulfilled the role as a lay minister of Word and Sacrament in this isolated and unlikely place that I came to realize I was being called to other work in the church. This unique turn of events was the spark to pull me towards a call to pursue ordained ministry when before this I would have never considered it.”

Though Dubuque, Iowa was a long way from home for the native Floridian, Jennifer decided to attend Wartburg Seminary in order to pursue the theological education and spiritual formation she needed for ordained ministry. “There were a couple of other seminaries that I had considered,” remembers Jennifer. “However, none of them exerted the same organic pull for me that I felt with Wartburg. It began with the Admissions staff who sought to know me… really know me from the very beginning. And this sense continued as I corresponded with faculty about my needs to balance a first-year seminary experience with my remaining duties as churchwide president for Women of the ELCA. My service to the churchwide women’s organization was not viewed as an obstacle, but instead as a gift.”

At Wartburg, Jennifer says, “My own unique gifts and talents have been celebrated and valued from the moment I have arrived. ‘Community’ may seem like a familiar theme here at Wartburg, but for me it has made all the difference.” The Wartburg community, she says, has embraced her and shepherded her, and she feels a vital connection not only with her peers, but also with her professors. Jennifer states, “At Wartburg, the faculty are more than just academic mentors. They are truly pastors to all of us–caring, nurturing, and counseling– so that we can be the best possible leaders for the future of the church.”

Jennifer is very hopeful about the future of that church. The past few years, she has followed the progress of the “Living into the Future Together” Task Force (LIFT) for the ELCA. One of the key recommendations coming from this task force is the need for renewed focus on creating vibrant congregational ministry. Jennifer says, “The church’s future will be revealed within parish ministry and I am excited to uncover what my role will be in this new ecology of the church once my seminary education is complete. Working for so many years within Women of the ELCA, I have seen first-hand the momentum that can be generated from just a few people with an idea. And here at Wartburg, with worship and community at the very heart of who we are, I feel that I am being formed to be in relationship with others in a way that brings cooperation, shapes vision and is, at the very core, Christ-centered. That is what will be needed for our future and that is why I am so very grateful that the Holy Spirit led me to come to Wartburg Theological Seminary.”